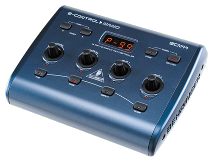 The Behringer BCN44 was a relatively simple, light-weight MIDI controller.
It came on the market in 2005(?) as a spin-off of the bigger, heavier and much more powerful BCR2000.
However, unlike the BCR2000 the BCN44 never became very successful.
Consequently, Behringer didn't manufacture the BCN44 for very long: around 2008 it started becoming unavailable on certain continents, and perhaps a year later its official web page announced that it had been 'discontinued' altogether.
And finally, around 2015 even its official web page disappeared...

BCN44 Manager is an editor for the BCN44.
Its first version was written in 2009 at the request of a few enthusiastic BCN44 users.
At that time the BCN44 had already been discontinued in Europe, so one of these enthusiasts kindly donated one of his own BCN44s to facilitate the development of BCN44 Manager.
Another user assisted in the analysis of the BCN44's data structures.
So BCN44 Manager was very much the product of a community effort, which yours truly has fond memories of.

Main new features of this version:

This is the 64-bit portable edition of BCN44 Manager 1.5.1 for Windows.
You don't need to install this edition: simply unzip it to a folder to which you have write-access and run BCNMan.exe.
This edition only runs on 64-bit Windows.

Note: All the above editions of BCN44 Manager 1.5.1 contain this manual too and will install or extract it automatically, so you don't need to download it separately here. So if you're updating from a previous version, just download the corresponding package above and install or extract it, and you'll be able to read the manual anyway.